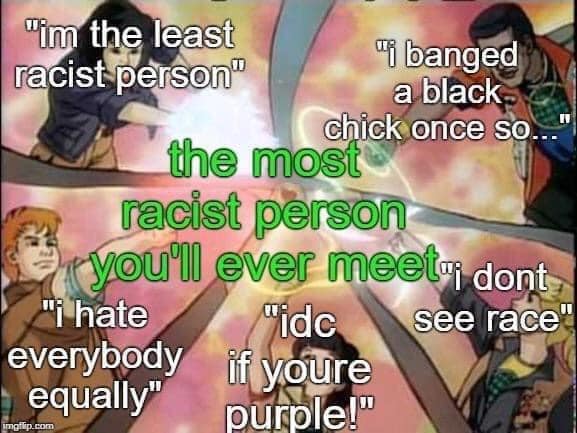 Can anyone please explain how "not seeing race" is being the most racist?

Cops are among the last institutions to be daring to bluntly categorize people by race, so why should we?

If you are so firmly convinced that races defined by skin color are a genetic, scientific reality then I think there is a major problem here.

Umm, short version: Not 'seeing race' is regularly used to systematically deny that there are historical advantages and disadvantages given to those people with the various created categories, cemented over centuries. We have to be able to recognise the categories to be able to unmake them. Regardless of whether a person sees race, racism is still there, and ignoring it does not make it go away, it perpetuates it. I've never once heard someone from around here say "I don't see race" who wasn't a full of shit racist who hasn't even done the basic work of understanding their place in history.

Race is not defined by genetics or even necessarily skin color, as shown by the fluidity of racial dynamics historically. It was and is a form of identification with cultural in-groups and out-groups. As a proof of this fact, take the racial identity of the Irish pre-assimilation into English and American culture; while the Irish were technically a part of the white in-group, they were considered a lesser racial breed than the English white man. Nowadays, however, the Irish white person is readily considered part of the white in-group.

To identify as white is to identify with the oppressing class. To identify as a POC is to be a part of the oppressed class, but also the class that fights against racial oppression. Therefore, the person who doesn't see race is ignoring the cultural dynamic in favor of positing that everyone is equal when oppression still exists, while discounting the cultural identify, for instance, of blackness, which has made real forays against oppression historically.

And this concludes my lecture on why racist white people with no experience of racial oppression racistly believe that people of color are racist for embracing blackness, brown-ness, asian-ness, etc. when such cultural identifications are opposed to the racism that led to the race dynamic in the first place. Race race race race race.

It's merely a component to being the most racist person.

It's also a stock phrase spewed forth by "not racist" liberals, typically as a response to being accused of being racist.

It's also used by liberals too uncomfortable with the discussion/acknowledgement of the socioeconomic realities of race; the sentiment itself is fine, but is perverted by insincerity.

That a racist person would deny the existence of races, this would undermine their racist beliefs, not the opposite.

Like White racists are such due to their gross generalizing and categorizing of non-White people in general, or maybe some more sprcific categories of non-White people. That they see them as part of a race is the main component of their prejudice against them, without which it wouldn't likely have ground.

There's also some occasional racist prejudice that's gotta do with the country of origins, for sure. Maybe also with the family or even ideology, but this is even more rare...

So if you remove the grounds for categorizing people as races, based on their skin complexion (that as you may know is only due to the melanin rate in the skin), and country of origin, you also undermine the potential for racist bigotry at the inception.

You look at what are the "race" categories today...

This doesn't make any sense! There are huge physical differences between, say, "Black" Africans or between "White" Europeans, and don't get me started with "Asians", lol.

Humans are different shades of brown/pink, and the only people I usually encounter opposing this view are White racists. Often this is due to ignorance, but bigotry is also frequent.

That a racist person would deny the existence of races would undermine their racist beliefs, not the opposite.

Don't assume racists are being sincere when they use this stock phrase, it's a deflection, nothing more. The meme is about racist people denying the existence of race to justify racist sentiments, all of the above are stock phrases.

Humans are different shades of brown/pink, and the only people I usually encounter opposing this view are White racists.

Then what are you even arguing against? If white racists are the only ones who can't see any physical differences between races, then the meme fits even through your interpretation of it.

Don't assume racists are being sincere when they use this stock phrase, it's a deflection, nothing more.

Okay sure, some are trying this trick. Tho the reality of race as a social construct definitely ain't an argument in support of racism, still.

That's the opposite to what I said. White racists are totally taking races as factor for major, inescapable physical differences, and see members of a same race as pretty much all the same.

Okay sure, some are trying this trick.

Yeah, and they're who the meme is making fun of.

Tho the reality of race as a social construct definitely ain't an argument in support of racism, still.

No one was saying anything to the contrary.

That's the opposite to what I said.

I did not think u/lautreamont assumed I was a race realist, btw. Just that they were asking a question.

Germans for example generally get aggressively taught not to 'see race' - it's weird when they come here. Different places just get told different stories, and some of them are bad ones.

I never said or assumed that of u/Tequila_Wolf

I was reacting to one single part of this meme that I find problematic enough to... react about it.

f/memer is the biggest ad-free collection of radical left memes on the Internet.

Either own the memes of production or burn it all down!

f/chapotraphouse for fans of the lib podcast

f/dankmemes for general memes that don't fit in the above forums.

Add [WORKSHOP] tag for content you want collective critique/input on.

Please refrain from posting content that is not memes; odds are there's a better place for it on Raddle. Mods reserve the right to remove posts that do not follow this rule.