The meme Captain Humorless is whining about is linked in this chain: 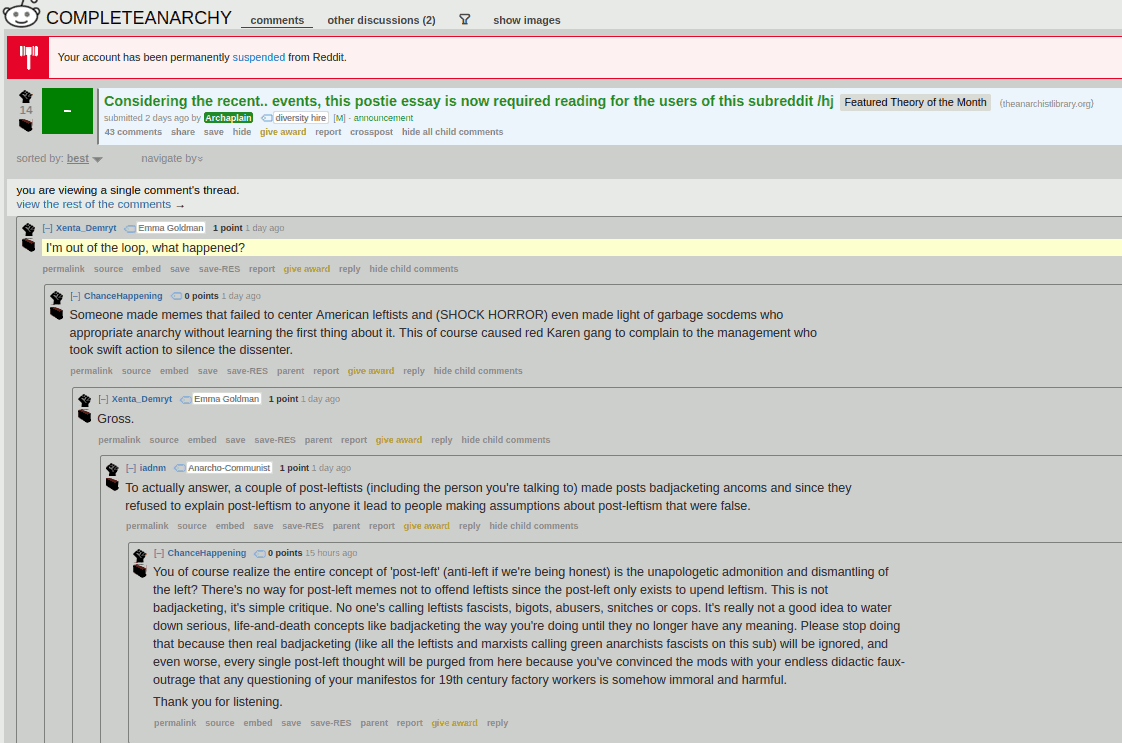 I'd fix this, but I don't want to hang around with reddit leftists.

I would say there is a difference in saying pro industrial revolution ancoms of a ableist ideology, having uncheck bigotry by love of a system that oppressed the shit out of immperialized countries and kinda like cops since so many of their systems would require anarchist "community defence gangs". This is different than bad jacketing, but I can easy see how a post left person would say these things within reason and easily could be written as a bad jacket with in reason.

You sound like you love cops? You keep talking about the need for a "good" community defense force to arrest people

God I have think you're ableist because because you never care about the African cola miners with black lung or the Chinese factory workers drinking water with heavy metals.

And there is a difference but I know I have reasonable claims to portray many anarchists as wanting to be cops and refusing to check inconvenient bigotry.

I'm in mourning that the person who posted this on Reddit is now gone. I pray that they are on Raddle.

That was so amazing when a bunch of reddit anarchists said they aren't having fun and it's an obligation.

Sure it's nice that anarchist on Raddle and modding reddit but like I don't think it changes how reddit either libs up it's users or you have to get libed up to get to a mod or whatever. Like just look at complete anarchy rules. Here is everything I find to be a problem

Don't be needlessly rude or argue too much with anarchists.

Which would work if humans worked on like a market place of ideas. But to Chang people's perspective you need to make it annoying to hold said position. In Raddle if u wanna say u think phones can be made anarchisticakky you have to defend it every time. Hence why no one does it without good reason. And stuff like veganism people get convinced by being rude and just hammering on. The people who would be convinced of veganism by a good reasonable argument are all vegan. So like it defanga any good minority position in anarchism so they have to ask you nicely to challenge bad ideas. Which is bad because the challenge of having good ideas and being checked for your bad ones is why I love Raddle.

Do not bash other legitimate anarchist ideas

Which should be self explanatory. Like a ton of ancoms literally imagine a society where I'm in a reeducation camp.

Tacit approval of ecoterrorism. And while it's not explicitly stated I doubt you could get away with talking about the harms of overpopulation. Which is just fact as American and west European lives require a underclass to suffer. There are too many Americans and Europeans for a global free society. Less Americans and west Europeans I'd always going to be good. And substantially more would be unsustainable easy. But I doubt u could say that without doing a "malthusianism". Tho I could be wrong.

Like it's hard to have a good space with these rules. And honestly the mods are trying to compromise and play both sides but you just gotta pick a team. And u can't pick post left on Reddit.

I love how I claim to be anti regular civilized life but the place I'm staying in is so riddled with mice that I've seen a mouse in the kitchen durning the day several times. I bring this up bc they always unerve me because I'll be on a room by myself then I'll sense someone behind me and see a mouse scurrying away. and it always freaks me up that they sneak up on me.

Fucking industrial civilization made me such a city folk that mice in the house jump scare me lol. At least I'm not so much of a city prick that I'm horrified at living in a habit that other animals live in too. Haha

God damn it now I'm imagining the mice coming out at night and crawling over me while I sleep on the floor lol. God damn I'm not very tough if that thought makes me slightly queesy l

I'm in mourning that the person who posted this on Reddit is now gone. I pray that they are on Raddle.

Raddle is the afterlife for all the good reddit anarchists.

The bad ones go to lemmy

Omg that amazing. Do the mods who banned you know it was you?

Allright I mean as long as ur having fun who really cares why u mid reddit ig.

Did you ban your own alt then?

Omg you might have a ziq soc puppet scandal on your hands.

Not that I care. I think it's funny that u are trying to play puppet master with redditors minds for fun

That subreddit is beyond saving.

Compare the upvotes on this to all the postie/anti-civ memes that were posted there.

I wish images displayed before the text in posts on raddle. the text is always providing context for the image but it comes first, before people have read the image.

lobby: Welcome to Raddle! The Forum for People

This is kind of a catch-all subforum, where you can dicuss things that would otherwise not fall into the other forums.

For example, you can introduce yourself, or your dog, or whatever.

Note that this is not for meta content. For that, check out /f/meta.

To donate to help with server costs:

If you have suggestions for the forum, a desire to change its look, or to become a moderator, please feel encouraged make a post about it in the forum or contact the moderator(s) directly.