these have been showing up all over the place.

i've gone through a real cycle of thoughts with these. my first thought was "good". but then i started seeing the same sign showing up with the exact same wording, and it got me thinking something weird was going on.

all the comments on these posts generally position it as a good thing. good. capitalists can't exploit their workers for shitty wages. good. people are realising that they can stand up against that shit. good. nobody wants to get shouted at by a jumped up mcdonalds middle manager, burning themselves on deep fat fryers trying to rush out a discount carcass mcwhopper to an entitled customer at 3am for minimum wage. good. people are standing up for being loopholed into working through a global pandemic.

but then i thought actually, this doesn't make any sense. because if they really wanted workers, they would increase the wage, right? that's how their dumb system is supposed to work. so, okay, they've crunched the numbers and realised that closing the store entirely is preferable to paying their employees higher wages. because they know that increasing the wage means they can never go back. they can never go back to exploiting people for the least amount possible. they are scared that if they pay more, people won't accept being exploited anymore. people will realise that they need you more than you need them.

so they think, okay we will take a temporary loss now by closing the store, rather than taking a long-term loss by paying our employees more wages. and this way we get to play the victim. we get to say "oh boohoo, these entitled workers don't want to work for us. sorry you can't get your carcass mcwhopper. blame these entitled workers."

are they doing this because instead of increasing the wage, they know that they can just say "oh no! the whole industry is collapsing! government pls!" and get bailed out on the taxpayer dime? 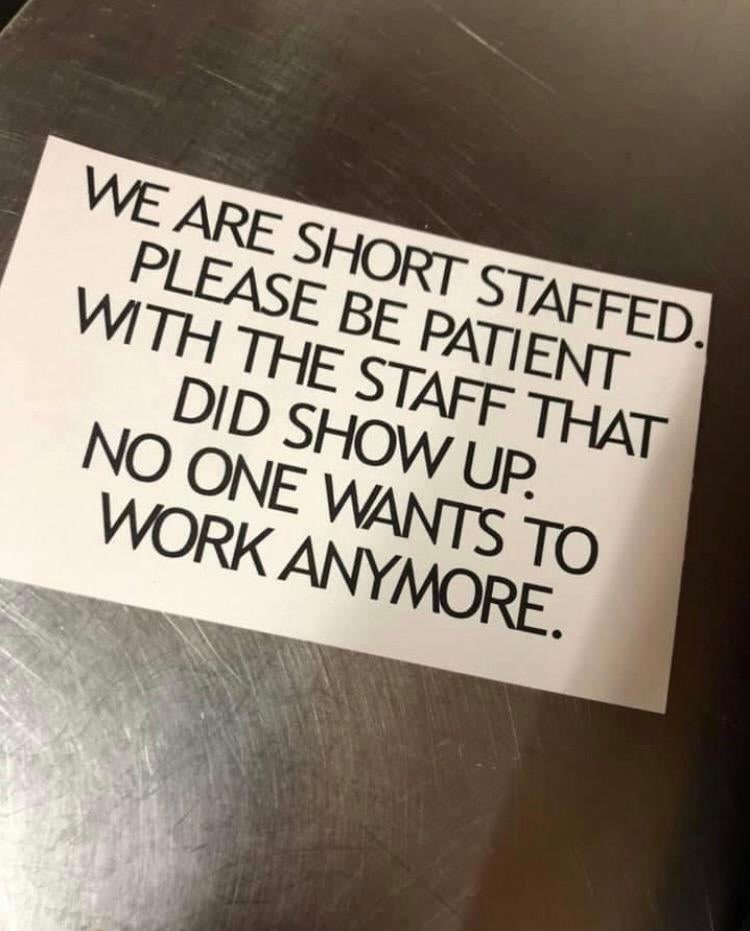 WE ARE SHORT STAFFED.

sure, this is good because that's less wages paid for more work. And sure, we were aiming for this level of work/wages ratio eventually. But it's bad because we got here faster than we had time to adjust for so our workers may not have become enured to this level of overwork yet. Please give us time. With some training they'll come good.

PLEASE BE PATIENT WITH THE STAFF THAT DID SHOW UP.

not because we care about the staff, no, we want you to adjust your expectation because the only winners here are us, and the customers should not feel entitled, they should be patient with the remaining staff. That way the customers get to feel good too, they are helping our business in these trying times, and by helping us they help our staff. Our remaining staff are morally responsible enough to be here and keep working for us, so by helping our business the customers are morally good.

NO ONE WANTS TO WORK ANYMORE.

don't you know about one of the pillars of economics, that welfare and government handouts makes people lazy, and disincentivises a healthy work ethic. Look what has happened to us hard working business owners that still value our work ethic. We are suffering because of the immoral sloth of the poor people who are now content to remain poor because they got a taste of that easy welfare money.

I agree on what are you saying, and the way I see it this is just one more symptom that we are facing a post Capitalist economy. I remember reading here some chronicles by Bifo Berardi and Agamben that she'd some light in the early days of Covid-19.

Small and medium businesses are dying because we don't have a Capitalist market anymore, even Big business are struggling. Only billionaires are thriving

do you have some links to those? that sounds like an interesting take

I gathered some stuff I read here on raddle in the past year from this perspective. But I think I am using "post capitalism" out of context, because I think this is a eurosocialist lingo.

Agamben wrote a lot this pandemics too, but I think his main focus is politics and state.

The signs all saying the same thing reminds me of this: https://youtu.be/ksb3KD6DfSI

Your conspiracy theory is a good one. It might also just be from some Facebook group that all these franchisees belong to. Conservative Busines Owners or some bull shit. They memed it and now they're all doing it.

Or maybe someone somehwere released the meme/wording because they have an end goal. The end goal could be: ending unemployment, ending stimulus, getting governement bail outs, etc.

Either way, it's interesting to see the facebook comment sections. There is always some "small business" shill saying people can't afford more while small business owners had enough money to fly to the capitol and start a fucking insurrection while their employees begged for time-off for health issues / a global fucking pandemic. And then there are a lot of people who are like "fuck them. pay me." and I love those people.

yeah there’s always someone who thinks they are part of the club while the big kids just string them along because they do their homework for them.

reminds me of this

From a United States context:

Work is deeply ingrained in the American psyche. People literally believe you can "work hard" and become a billionaire from nothing. All lies, of course. All anyone has to do is look at the numbers. These signs that are popping up broadcast the confusion, disgust, fear, and hate coming from the people that believe in the myth of hard work. A cursory peek at the signs gives the game away; you can almost feel the resentment from the owner class. "This is not the way things are supposed to be!" cries the boss. So, they shame the people that are supposed to be beneath them. and, they hope, the shaming will stick because everyone is supposed to believe that work ethic = morally good = success = deserved money.

The people at the bottom know what's up. The waiters, dish washers, cooks and bartenders don't make the rules, however. They aren't privy to the inner workings of governments. The small businesses and their small tyrants though, they already have a foot in. Small businesses are part of American mythology. They are churches to the religion of American capitalism. If they fail, America fails.

You might be on to something. Bailouts do tend to go to the owner class. Perhaps these signs are the first step in the PR war to come. Lazy drones that do not know their place versus hard working, deserving small businesses, the backbone of America.

yeah. the copy paste wording does make it seem like a big fuck you. like a shocked pikachu face meme. “how could you do this to me?” an assault on the concept of unemployment benefits.

it’s not our shitty wages and exploitation that are causing us to fail. it’s that unemployment benefit.

Right now there is a coordinated push to eliminate expanded unemployment benefits. This could be a part of that.

Pursuing a society where work is a foreign concept

Join the fight against wage slavery and don't waste your life doing shit you don't want to do.

The anti-work anarchist solution is to abolish work either through productive play or automation. Productive play is the process of turning certain tasks into play.