Bits from his Democratic Pan-Slavism:

Just a word about "universal fraternal union of peoples" and the drawing of "boundaries established by the sovereign will of the peoples themselves on the basis of their national characteristics". The United States and Mexico are two republics, in both of which the people is sovereign.

How did it happen that over Texas a war broke out between these two republics, which, according to the moral theory, ought to have been "fraternally united" and "federated", and that, owing to "geographical, commercial and strategical necessities", the "sovereign will" of the American people, supported by the bravery of the American volunteers, shifted the boundaries drawn by nature some hundreds of miles further south? And will Bakunin accuse the Americans of a "war of conquest", which, although it deals with a severe blow to his theory based on "justice and humanity", was nevertheless waged wholly and solely in the interest of civilization? Or is it perhaps unfortunate that splendid California has been taken away from the lazy Mexicans, who could not do anything with it? That the energetic Yankees by rapid exploitation of the California gold mines will increase the means of circulation, in a few years will concentrate a dense population and extensive trade at the most suitable places on the coast of the Pacific Ocean, create large cities, open up communications by steamship, construct a railway from New York to San Francisco, for the first time really open the Pacific Ocean to civilization, and for the third time in history give the world trade a new direction? The "independence" of a few Spanish Californians and Texans may suffer because of it, in someplaces "justice" and other moral principles may be violated; but what does that matter to such facts of world-historic significance?

We would point out, incidentally, that this theory of universal fraternal union of peoples, which calls indiscriminately for fraternal union regardless of the historical situation and the stage of social development of the individual peoples, was combated by the editors of the Neue Rheinische Zeitung already long before the revolution, and in fact in opposition to their best friends, the English and French democrats. Proof of this is to be found in the English, French and Belgian democratic newspapers of that period.

We repeat: apart from the Poles, the Russians, and at most the Turkish Slavs, no Slav people has a future, for the simple reason that all the other Slavs lack the primary historical, geographical, political and industrial conditions for independence and viability.

Peoples which have never had a history of their own, which from the time when they achieved the first, most elementary stage of civilization already came under foreign sway, or which were forced to attain the first stage of civilization only by means of a foreign yoke, are not viable and will never be able to achieve any kind of independence.

And all that by way of thanks for the Germans having given themselves the trouble of civilizing the stubborn Czechs and Slovenes, and introducing among them trade, industry, a tolerable degree of agriculture, and culture!

But it is precisely this yoke imposed on the Slavs under the pretext of civilization that is said to constitute one of the greatest crimes of the Germans and Magyars!

To the sentimental phrases about brotherhood which we are being offered here on behalf of the most counter-revolutionary nations of Europe, we reply that hatred of Russians was and still is the primary revolutionary passion among Germans; that since the revolution hatred of Czechs and Croats has been added, and that only by the most determined use of terror against these Slav peoples can we, jointly with the Poles and Magyars, safeguard the revolution. We know where the enemies of the revolution are concentrated, viz. in Russia and the Slav regions of Austria, and no fine phrases, no allusions to an undefined democratic future for these countries can deter us from treating our enemies as enemies. 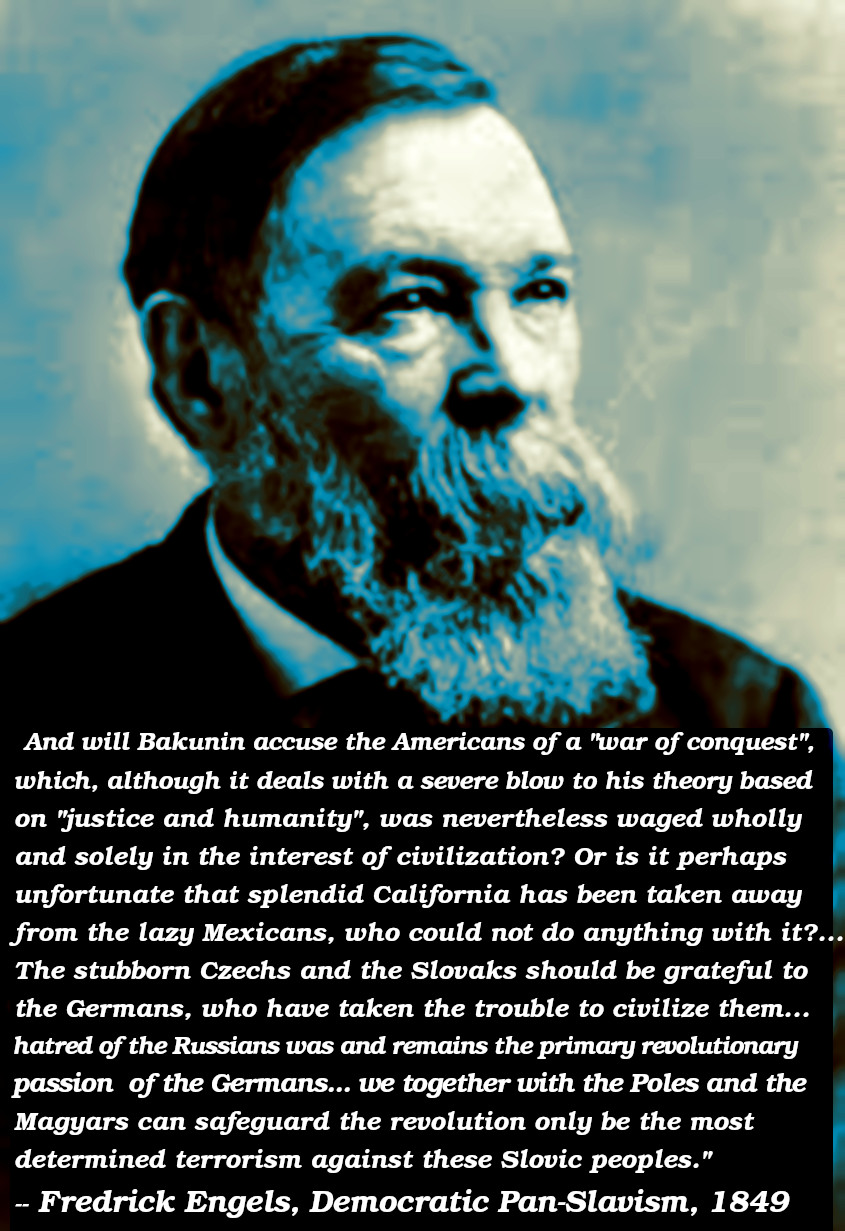 whats jarring here isn't just Engel's German Chauvinism, but that he seems to believe in a kind of racial heirarchy which he seems to justify using historical materialism,, where more developed nations are more civilized etc., less developed--inferior, economic development and imperialist conquest both serving the interests of civilization. apparently he subscribed to eugenics and all that... not surprising for a 19th century German factory owner.
But as Engels point out him and Marx stood " in opposition to their best friends, the English and French democrats." In their hatred of Slavs and defense of the civilizing virtues of German expansionism. So even for the time this position was bass ackwards.

Saving to own MLs.

Perhaps raddle’s most general forum! This is the space to engage on broad anti-capitalist questions beyond any subgroup.

This forum needs moderators and should have representation by as many general strands of anticapitalist as possible - if you’re up for it, post about it in f/meta or let an admin know about it directly!