It glorifies not only the military, but private military and has woke liberals all over the internet squeeing at imperialist mercenaries being unleashed on the streets of Gotham to "fight crime" because they're queer and gaze longingly at each other while they stick their assault rifles in some law-breaking peasant's face.

All Batwoman wants is to be accepted by her billionaire war-profiteer dad so she can join his private army and cull all of those mentally ill homeless people in colorful costumes. She travels the world training so she can join his elite team of corporate mercenaries. God forbid they use that family fortune to actually help these poor desperate people, but why do that when you can murder them and then bill the city for your services?

Anyway, daddy doesn't want her to be put in danger fighting on the front lines of dirty, poverty-stricken Gotham City, so instead she borrows her billionaire cousin's Bat-suit to prove to everyone she can beat the shit out of the poors too and save her imperialist girlfriend from her evil sister who came back from the dead or something. 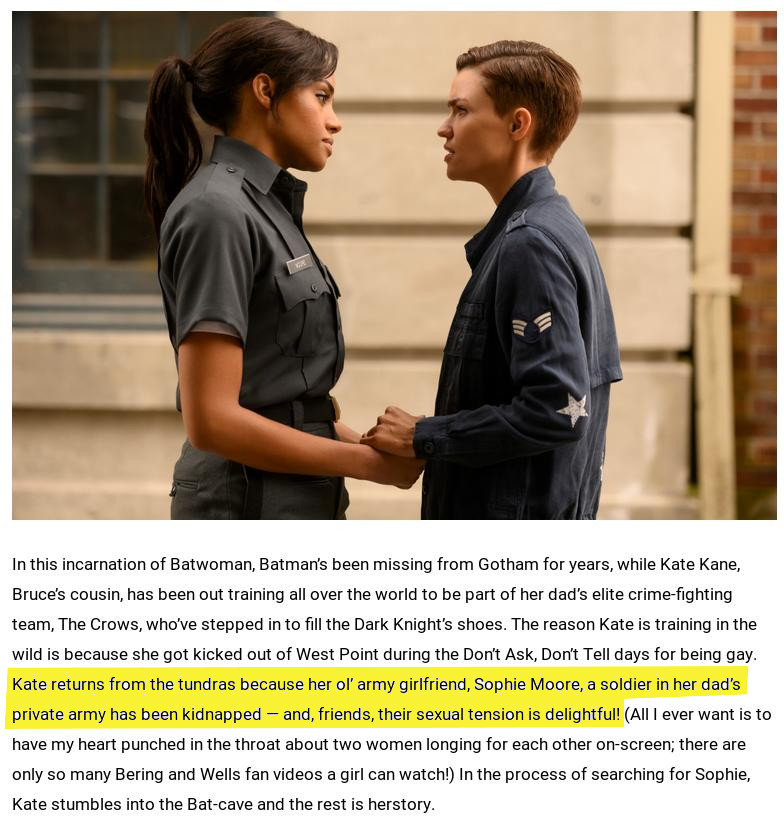 This is what people should be criticizing instead the sexuality and gender of the protagonist. Reactionary trolls are silencing real criticism, distracting and diverting discussion on the real problem with the show.

What are they saying?

They do that for every genre project that doesn't star a white man. They're brutal on Star Trek Discovery.

Oh noes. I have been taping it, but haven't watched it yet. It looked so sexy. I shouldn't be surprised that it is super militaristic because of this

I for one can't wait til all the empire's drones are painted rainbow colors.

Not all theme support spoiler tags, watch out for that.

If you have suggestions for the forum, or to become a moderator, please feel encouraged to make a post about it in the forum or contact the moderator(s) directly.