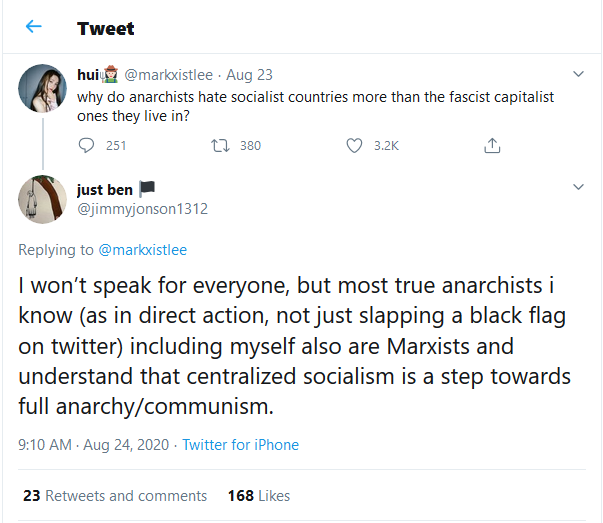 Who are all these anarcho-marxists and where are they coming from?? Damn

Looks like shitty entryism. Tankies are jealous that anarchists are the new bogeyman.

The brain worms are real. At least online it seems like every anarchist is scared to say they’re not a marxist. People see Marxism as a litmus test for being anti capitalist and it’s hard to get them to see it any other way. I can almost understand, it’s frusturating being seen as a neoliberal vaushlord at first glance by people irl because I’m anarchist but not marxist.

But ultimately I wish people would just be a little brave and have some individuality.

It's not reconcilable with the typical white American Anarchist approach that wants to abolish the state as a first step towards a classless society. From the ML perspective, Anarchists are proceeding in the wrong order, and i believe them to be right about this.

However, I love anarchism for its conviction, moral values and small-scale praxis and i'm all for left unity with MLs. My suggestion to reconcile Anarchism and Communism is to have Anarchist enclaves within the worker's state once it is established, as a kind of test bed for the transition from state-owned to worker-owned economy.

For that to be a possibility, we would first have to tackle the outside pressures (imperialism), of course, because this approach is unworkable under the conditions of siege socialism we've seen in socialist states in the past. You can hardly say "sure, we Anarchists can just do our thing in that zone" when you're constantly threatened by imperialist subversion attempts or outright plans for hostile invasion or the installation of dictators. Under those circumstances, you need a strong centralisation of power were everybody contributes in a structured, organised way, which leads to the very important siege socialism described in Parenti's works.

This is a secondary problem, though, as the removal of imperialist and fascist interference should be the immediate concern and priority of all anti-capitalist movements in the Imperial Core to begin with. To make socialist approaches attractive to ignorant Westerners, we first need to create states that can develop as something else than siege socialism. So the conditions necessary for the co-existence of MLs and Anarchists are simultaneously the conditions needed for post-capitalist societies to unfold their full potential and develop unhampered by outside forces.

“Worker enclave” Sounds like a long winded way of saying gulag lol. Different anarchists are different, but my point and the general Bent on this site is that we don’t want to work. Also don’t admire anarchism for its morality because lots of us don’t believe in morals.

Also, If there wasn’t a centralized state to coup, wouldn’t it be harder for someone to take control of a population? Like centralizing power (for “socialism”) creates the apparatus that the cia or whoever can take over.

If you have the approach that I have to work in a state, that I don’t control, there is no unity between us at all. You are an enemy who wants to control me for my labor. That’s not different from the capitalists

Do you think we don't know history?

That's exactly what China did, experimented with various levels of control in different parts of the country, til they found what worked, and brutally enslaved those that didn't work towards "Harmonious Society". Testing soft power and hard power, to get the balance of corruption working for the right people.

They're the shining beacon of Socialism 🙉

If there is a "transitional state" it will be Libertarian in nature, decentralizing power, before total dissolution.

You know the type. Straight up human garbage.