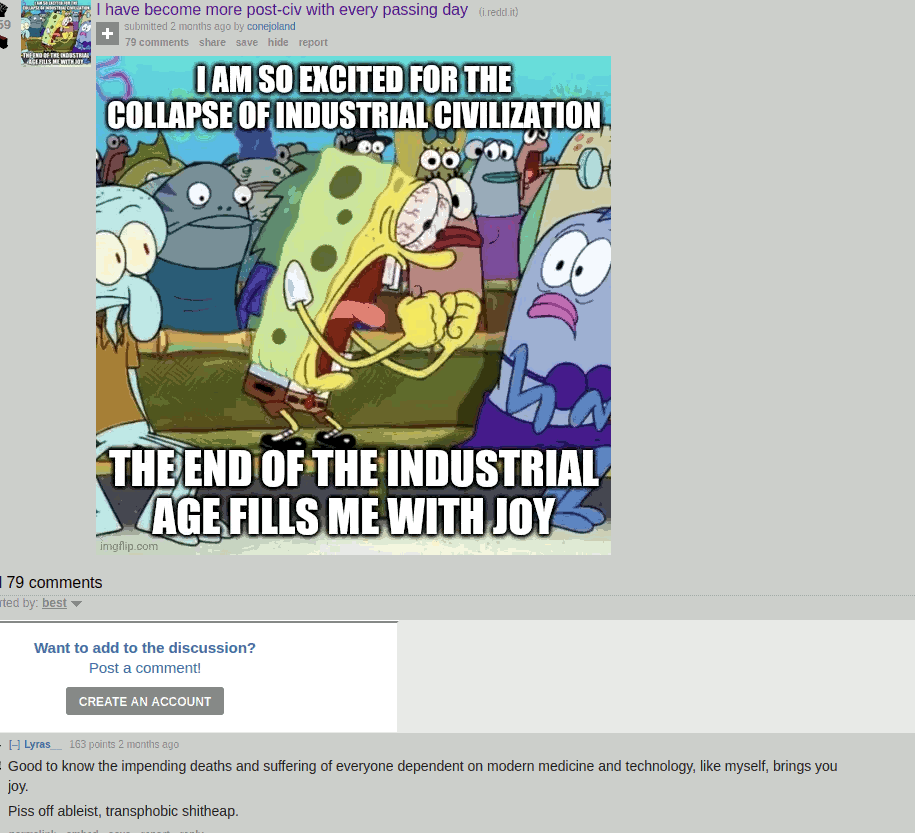 it seems to be a huge inconsistency with reds: claiming to desire the overthrow of the social order but being terrified of the consequences of life beyond that social order.

isn't communism all about trusting in your fellow humans to foster a better way of life for all, rather than putting the power in government and capital to dictate the organization of society?

so why does every red seem to panic and go on the attack when someone voices their desire for a new era of human development, to move past the global ecocidal catastrophe we live in?

You're the ones celebrating the loss of everything they need to survive, we're the ones telling you to stop because then dying is bad. Keep projecting, embarrassed eco-fash larping as an anarchist.

So you don't trust anarchy to care for people? Yet you're an anarchist?

Why do you hate trans people?

When you oppose the mass control, torture and death wrought on us by leviathan, that means you... hate trans people? how is this any different than conservatives saying being anti-climate-change means you hate the working class?

This piss me off in some deep level.

Dependency on technology or in the State is not an issue for Anarchism, yet they keep pushing this narrative.

"everything they need to survive" is problematic beyond reasonable. Reeks of whiteness and colonialism.

If the mainstream internet anarchism™ didn't reached past the point of needing democracy, we are not ready to see death and bodies being discussed without this milquetoast liberal takes

Not to forget the only reason they can do HRT is that they or their parents can afford to pay for their medical expenses. How many people in the US die each year because they cannot afford fucking insulin? So yeah, congratulations on winning the birth lottery. It makes perfect sense you'd want to keep the things as they are.

So I have no interest in defending ridiculous accusations from reds, but this response rubbed me the wrong way and here’s why:

Nothing personally against you, but my brain wouldn’t stop itching until I’d written out some kind of response.

I wasn't responding to someone's concern over being denied healthcare, but to someone accusing anti-civs of being ableist without realising that civilisation is ableist by default.

Fair enough, thank you for the clarification.

I wonder how they'd react to an ancom revolution, how quickly they'd plead for everyone to stop rising up because its obstructing the functioning of the system? When the supermarkets are all closed due to looting? When the stockmarkets crash and Starbucks and Netflix go out of business because money no longer has value? When the hospitals stop operating because the bougie doctors won't work without pay? When the police stations are all shuttered and there's no one to stop people from storming gentrified neighborhoods to take back their homes? When the white army is going house to house shooting leftists and the red army is going house to house shooting rightists? Something tells me it'll be long before any of this. Probably when their savings account is wiped out or when their boss closes shop and lays them off.

Some people would much prefer keeping everything about the present order except who's in charge.

Circlejerk and meme hub for deserters, drop outs, vagabonds, nomads, drifters and subsistence farmers that strive to detach themselves from civilization before it implodes