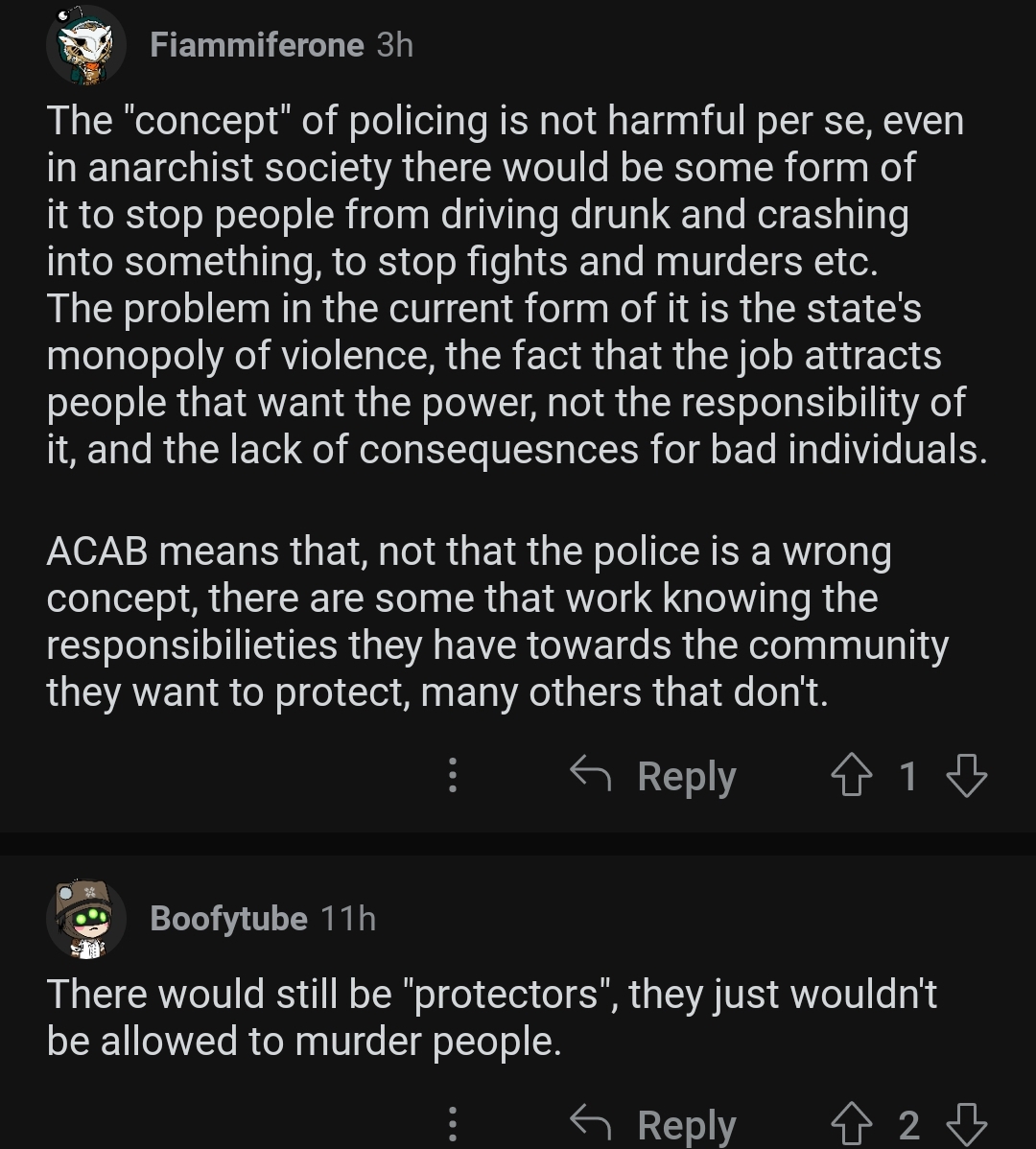 Imagine, anarcho-cars! I never supposed we would be in such a hurry in our great and wonderful anarchist society.

Just like how we should get rid of bad authority and replace it with good authority, and bad industry should be replaced with good industry.

Maybe this is my soberism speaking, but would an anarchist society even necessitate the drinking culture we have that precipitates drunk driving? Esp if we’re speaking of the idyllic “anarchist utopia” we loathe to philosophize about, the reasons to want to get shitfaced and drive ur car into a mom with a stroller goes down dramatically.

I would guess not. So much of people's lives under authority is spent distracting them from reality, whether with entertainment, drugs, and so on. Enjoyment is completely twisted, so that "cheap" laughter and comedy replaces real happiness, inhabiting the beauty of reality. This is what I have observed from my own reactions to stress, and those of other people.

There's a complete lack of imagination when people say things like this. We would be living in a fundamentally different society than we live in today if we lived under anarchy so a lot of these structures that are oppressive wouldn't be necessary. They really do imagine just taking society today and removing the rules and then tada anarchy! Which is not what it would be at all.

Why wouldn't the bar have some beds upstairs for people to sleep it off? If it's a lovely night outside why wouldn't they opt to camp? Why not stop at one of the many public hostels? those are things that I can imagine would be alternatives to drunk driving in an anarchist future. there might be some sort of transportation options for folks that don't live near the local watering hole but it's not like anyone needs to be home by a certain time so that they can get enough sleep before they have to get up at 6am to get ready for work, you know?

"in a anarchists society we need to preemptively strike people who do acts that might cause harm. Also we needcops to prevent property damage of the worker co ops."

In a anarchist society anyone who tried to be a cop would just get killed. Otherwise just be a lib soc is u wanna have a government with goons to take care of people u don't like don't be a Anarchist lol. That's what I did when I realized I thought a personal secret police would be sick. Lol

Real hot take, I would much rather live in a area rampant with drunk driving, killing, property damage, fighting and killing if that meant no cops. Hell I live in a area where like risk of violent crime is like 1 in 50 for the overall city and I live in the bad part of the city and I still am far more concerned about cops that random people.

Cops will beat the crap out of you and shoot u for no reason while people have a reason which are usually pretty easy to avoid. It's not the war zone of Ukraine and Russia but like it's not like I'm living in a suburb and being like "yeah I'm be fine with more violent crime" which would look hipocritical.

Also I love how this anarchist society would still have drug cops. To prevent drunk driving. And to be fair if we are imaging a fantasy land I would def retire off my UBI benefits and spend my retirement hunting the unarmed drug cops who aren't allowed to kill me. Hmm I wonder what the Anarcho government would do then?

Also that scenario is made up for a gotcha Is all. Not actual ideation.