The recent behaviour of USW 1-1937 leadership, as captured in their September 29th statement* is a treacherous departure from the social orientation of the labour movement, as they intentionally obfuscate the issues at Ada'itsx/Fairy Creek. They are attempting to misrepresent the issues as workers versus protesters, while concealing their collaboration with industry and corporate interests at the expense of their union membership. The simple question must be asked: Exactly whose interests are they representing?

Far removed from the day to day realities of the job site, 1-1937 leadership has wholeheartedly cooperated with employers in turning the screws of neoliberal economics on their union membership. Through consistent give back contracts to industry, exemplified by wages being negotiated below inflation and company right to manage clauses completely undermining workers' rights, 1-1937 leadership acts more as a labour contractor than defender of workers' interests. For this service to the industry, they are generously rewarded with salaries far beyond that of the rank and file worker.

In their attempts to pass off their clique interests as somehow representative of their 6000+ membership, 1-1937 leadership ignores the experiences and interests of these 6000+ workers, especially in regards to Indigenous rights and environmental sustainability. This vast diversity of thought is erased to support the fabricated impression of a singular will. Considering how comfortable 1-1937 leaders are with the many documented cases of pro-industry thuggery, they can count on their pro-industry dogma to be enforced. Under such a regime, open discussion of diverse opinions becomes enormously difficult if not outright dangerous.

Their September 29th statement truly shows where their loyalties lie. Favourable referencing and encouragement of police enforcement of injunctions, in order to ensure work continues in spite of disruptions, is pure scab talk. This is the exact logic used by industry and corporations when they are herding scabs through picket lines. Seriously, on which side of the picket line does 1-1937 leadership stand?

It is no wonder then, that they unapologetically quote pro-business publications attempting to paint a picture of a clear and present danger. Notwithstanding their declarative tone, this sort of piece setting for panic is unconvincing. As work speed-up and streamlining progressively increase the day to day dangers faced by workers, the public is instead presented with an unsubstantiated hypothetical posed by “extremist elements.” It is apparent that this media campaign is based more on the timing requirements of disinformation than reality.

Both Teal Jones and USW 1-1937 leadership collapse the many intersecting issues concentrated at Ada'itsx/Fairy Creek into “Tree Farm License 46”. Countless labour publications are covering Ada'itsx/Fairy Creek, but go unmentioned by 1-1937 leadership. Instead, a pro-industry narrative is being meticulously cultivated at the expense of workers, Indigenous communities and a sustainable environment. 1-1937 leadership needs to quit holding hands with the corporate bosses, or at least be up front about their gentlemen's arrangement. Misrepresenting the issues at the behest of corporate industry so as to continue parasitizing their union membership is a betrayal of labour values, plain and simple.

In Defiance, The Ghost of Joseph Mairs 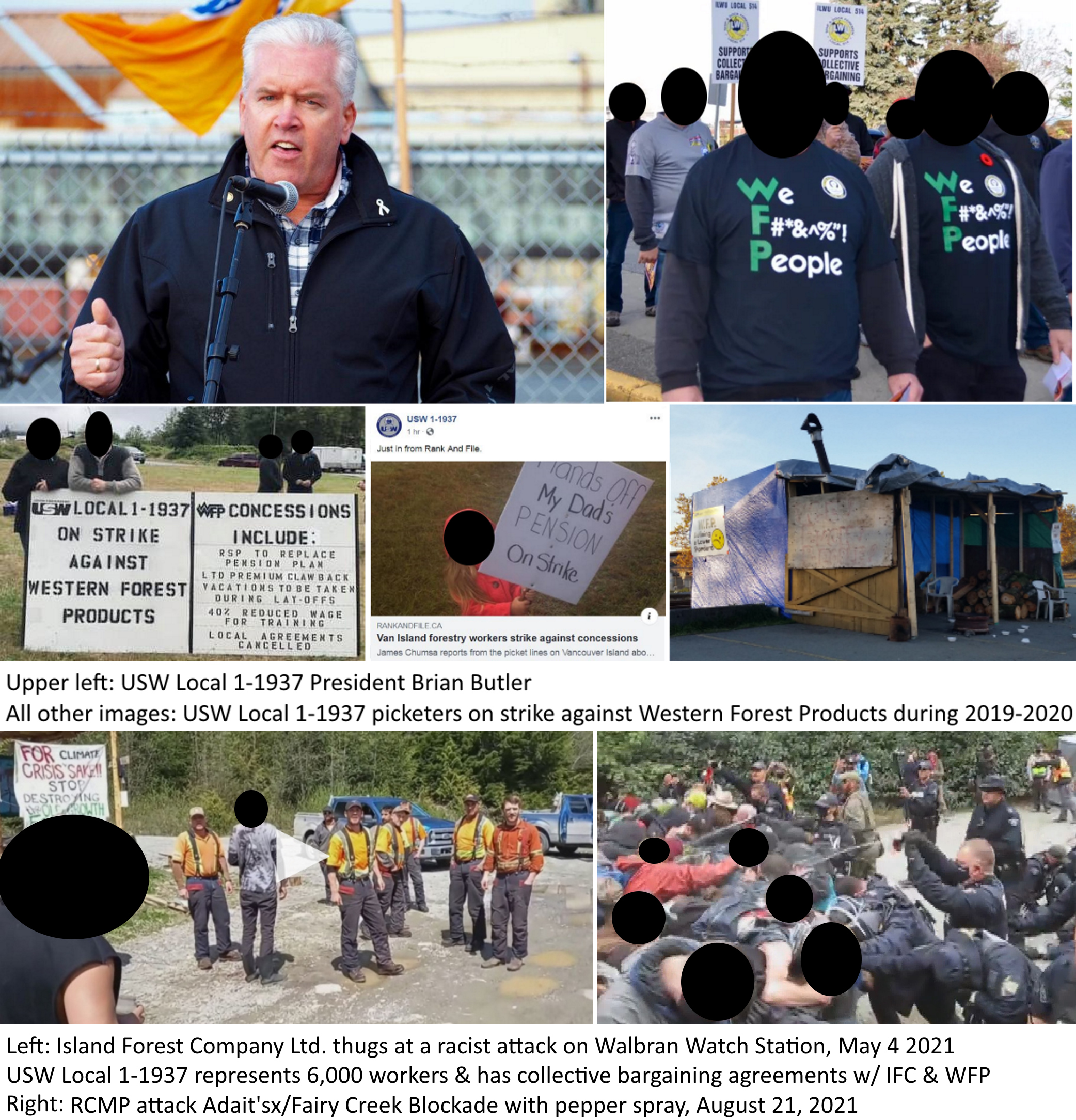 A forum around Canada, especially from an anti-authoritarian and anti-capitalist perspective