The San Juan River, flowing into the Pacific Ocean on the southwest coast of Vancouver Island, feels different than most island rivers. This majestic coastal river ecosystem is of a scale one is more accustomed to seeing on the mainland. The meandering braids of the broad estuarine area it shares with the smaller Gordon River, sometimes cloaked in mist that hides the mountains of the surrounding valleys, are home to everything from salmon and steelhead to giant green sturgeon. The area around the watershed is also home to the biggest trees still standing in so-called Canada, such as the Cheewhat Cedar, the San Juan Spruce and the Red Creek Fir.

Since August 10, 2020,[1] grassroots blockades have continuously defended the headwaters of Ada’itsx (Fairy Creek) – the last unlogged tributary of the San Juan – from being clearcut by Teal Jones Group and its contractors. This is the longest sustained direct action of its kind in this region since the infamous Bear Mountain treesit in Langford (2007-2008).[2]

Resistance to logging in Pacheedaht Territory goes back decades. The coming summer will mark 30 years since the “Hot Summer” of 1991, when Indigenous warriors like Harriet Nahanee and settler anarchists began a successful defence of ancient forests in Kax:iks (aka The Walbran). Pacheedaht elder Bill Jones has welcomed the current blockades, and shared his desire to see a memorial to victims of the genocidal smallpox epidemic, and a hunting cabin built on site as part of Fairy Creek’s long term protection. Tla-o-qui-aht elder Joe Martin (veteran of the first logging blockade in so-called British Columbia, on so-called Meares Island in the mid-1980s) has also visited the blockades with members of his family to show support.

Grassroots land lefenders observing the area in July 2020 discovered the imminent blasting of new roads into Fairy Creek. Fed up with seeing the equivalent of 32 soccer fields of ancient forest logged every day, on an island with only 1%-3% of low-elevation, high-biodiversity rainforests remaining, an informal collective of people from across the island established a blockade where the road building contractor (Stone Pacific) was about to crest a ridge into the west side of the Fairy Creek watershed. One week later, a second blockade was established defending the eastern approaches to Fairy Creek, and contiguous remnants of ancient forest.[3]

In the weeks and months since then, with intel that corporations like Teal Jones use advanced analytics software[4] to re-route around such obstructions to continue extracting profits from the landbase, pop-up blockades have successfully disrupted road building and old growth logging at other nearby hotspots and chokepoints, such as Edinburgh Mountain, Bugaboo Creek, Camper Creek, and Eden Grove. As of this writing, the Eden Grove blockade has remained continuously occupied since mid-December.[5]

Solidarity actions have broadened the frontlines from the wilder west side of the island to the more industrialized east side, where the Rainforest Flying Squad and Extinction Rebellion have blocked old growth log trucks on the Trans Canada Highway, as well as at the ports in Nanaimo and Ladysmith, resulting in the only blockade-related arrests to date.[6] A video report of one such action was removed from the CHEK News (corporate media) website a couple hours after it was broadcast and posted.[7] Some participants in this growing movement have experienced police harassment near their homes prior to such actions, and trucks loaded with old growth logs were seen being escorted by police cruisers from felling areas on the west side of the island, to east side ports on at least one occasion.

Some of these actions have targeted Western Forest Products (WFP) in addition to Teal Jones. WFP holds the majority of Tree Farm Licenses (TFLs) on Vancouver Island, devastating the land with clearcuts while devastating its workers, who went on strike for 8 months from July 2019 to February 2020.[8] Teal Jones has stated its intention to completely destroy the remaining old growth forest in TFL 46 (which largely impedes on Pacheedaht Territory),[9] while the Ocean Wolves of Caycuse have stated their intention to disrupt old growth logging in neighbouring Ditidaht Territory.[10]

Anarchists have contributed in various ways,[11] including autonomously felling trees and locking gates to block active logging roads.[12] The loudest voices in the movement are largely liberal and reformist, and therefore vulnerable to recuperation by politicans and BC’s highly collaborationist and parasitic environmental NGOs.[13] Some ENGOs have predictably tried to piggyback on the success of the blockades to fundraise for their lobbying campaigns, which divert people and resources away from grassroots action. Nevertheless, the blockades and other actions have so far remained grassroots and autonomous, even while receiving celebrity endorsements[14] and bolstering demands to end old growth logging by the Union of BC Indian Chiefs.[15] The utter and abject failure of ENGOs to have any material effect on the liquidation of forests in so-called BC is a major reason why these blockades have attracted so much support.

Anyone familiar with the history of resistance to logging in so-called BC, knows that in recent years, resistance, while successful at times, has been mostly rather sporadic and small in scale. But the spectre of the widespread “war in the woods” (c. 1985-2005) flaring up again haunts the colonial state, with tension in the air at times as thick as smoke from wildfires that are increasingly common even in these coastal rainforests, which are some of the wettest places on earth.

While an estimated 500 people have visited or participated in the blockades at some point over the last 5 months, the Fairy Creek and Eden Grove blockades are currently requesting visitors by invitation only, due to harsh COVID-19 restrictions recently enacted by the provincial government. Affinity groups can take action elsewhere in TFL 46 or against Teal Jones at any of its operations on Turtle Island, including its headquarters in Kwantlen Territory (North Surrey).

(please note: the authors of this article are not affiliated with any websites/links contained in this article)

Podcast about the blockades (from the 2020 Victoria Anarchist Bookfair) https://victoriaanarchistbookfair.ca/index.php/2020/09/20/vabf-dy-6-blockader-suzanne-on-the-no-roads-into-fairy-creek-series-of-actions

Beautiful BC: Without the Wild (culture-jammed government greenwashing video) https://www.youtube.com/watch?v=92NRtbefw5Q 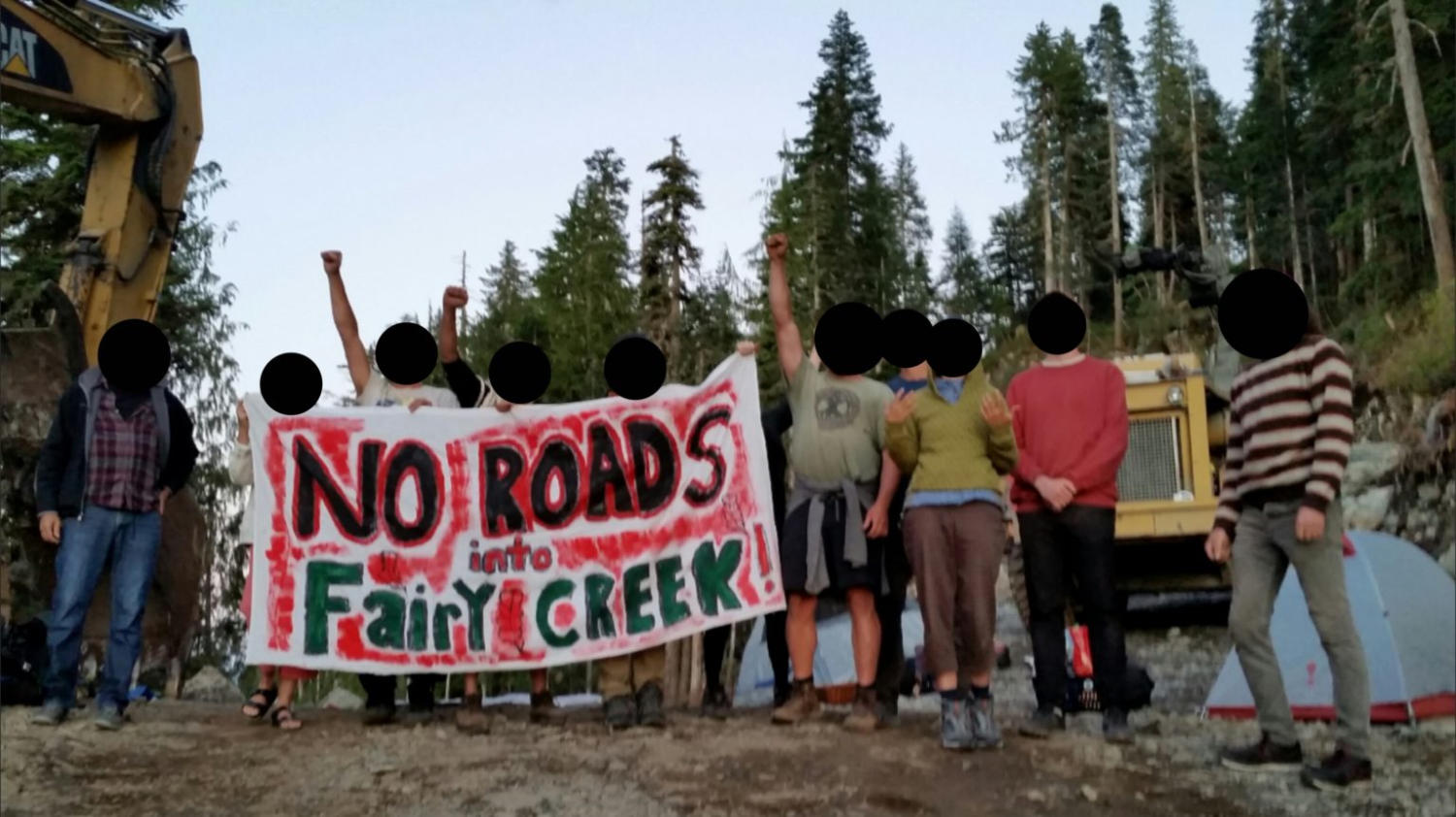 This is solid, thanks a lot for taking the time to write it up and share it. BC needs an autonomous counter-info site, but Raddle works in the meantime.

A forum around Canada, especially from an anti-authoritarian and anti-capitalist perspective